A downloadable game for Windows, macOS, and Linux

[Speer DX] is now out on Steam! This director's cut version of the game has more levels, more features and is more better.  Get it here!

Grab your Speer and use it to make your way through this puzzle-platformer! Throw your Speer into walls and use it as a platform, hurl it at switches, hit enemies in the face with it, power it up with unique abilities...the possibilities are endless!*

Each room is filled with obstacles and items, from spikes and lasers to portals, bouncepads and breakable walls. In order to make it through the 100+ levels you'll have nothing but your Speer, your wits and your reflexes. Are you up to it?

*The possibilities are not endless

"A stylish retro puzzle platformer with some great level design and speer hurling gameplay that’s well worth taking a stab at."

"Dude I love Speer so much!"

In order to download this game you must purchase it at or above the minimum price of $3.99 USD. You will get access to the following files:

Amazing single-room puzzle platformer of perfect length, tho the difficulty of the final four levels was too much for me.

I keep getting an error popup at the end of the first level, is there any way to prevent this?

I would hope so... what does it say? And what platform are you playing the game on?

Downloaded the windows version from a bundle, the error says Custom([file_write,stderr])

Despite some frustrating levels at the end, this game was overall very nice and cozy. The gameplay, graphics, and music all worked together really well. I found a decent amount of ways to cheat the levels, but that made it more fun!

The game is very good. Unfortunately on Win 11 it crashes quite often with the error message Custom(file_write, stderr).

woah nice page which means that this game looks cool. ill play this after i finish downloading the other interesting looking games in the ukraine bundle

Just finished it! Lot of great ideas: the gems mechanism, the interaction between items, the grid background... That was really fun to play!

Fun little game! The pacing is not as fast as expected, so it is likely harder than it may seem at first. The game suffers from fiddly mechanics and occasional pixel-perfect jumps, but the level design is very promising.

I did 100% completion (105% if you will :>) and it was a very enjoyable experience! Sure, it was frustrating at times, but the "Frustrated?" warnings imply I may not complain.

The puzzles were such a perfect balance of challenging yet doable. I absolutely adored the soundtrack; the graphics are cute and charming; the gameplay was very satisfying too. Sometimes the action button being bound to the spear button was a bit problematic but it didn't happen so often that it frustrated me, just hit reset and try again (edit: took me too long to realise you could remap these buttons ;_; ).

One of the best puzzle platformers around...period!

I really enjoyed the game and included it in my second Hidden Gems Video. A like/subscribe would help me a ton to continue with this series <3

Thank you so much!

I am loving this game. Great mechanics, good difficulty and great pixel art. Congratulations to the developer.

Thank you, I'm glad you're enjoying it!

Hi I want to replay it, how do I delete the saves?

The save files should be in your User folder, under AppData/Roaming/Ohsat Games by Andrej Preradovic/Speer!

One of the many hidden gems here on this site <3 top notch contorls and game mechanics, also will the OST be available for purchase? :)

Thank you so much! The soundtrack was done by Andrea Baroni aka Cyberleaf Studios. I can't resell it, but you can get all the tracks here: https://assetstore.unity.com/packages/audio/music/electronic/the-8-bit-jukebox-l...

Is it possible to get this game's OST somewhere?

The soundtrack was done by Andrea Baroni aka Cyberleaf Studios. I can't resell it, but you can get all the tracks here: https://assetstore.unity.com/packages/audio/music/electronic/the-8-bit-jukebox-l...

This was a great minimalist lo-fi puzzle platformer that is somewhat held back by a few issues with UI and design.

I liked the great mix of platforming and puzzling. A great example of this was the ability to use the speer to climb walls. It was consistently delightful, and felt entirely satisfying throughout the run. I also liked that the speer had a small throwing arc, and this was even relevant in a few levels. Finally, levels are plentiful and varied, while still being rather quick to complete.

I did have a few issues with the UI in particular, though I feel like these could easily be fixed. First of all, both speer-throwing (which pushes stuff away) and grabbing, i.e. two opposing actions, are on the same context-sensitive button. This led to a lot of feelsbad moments for me. I had to restart so many levels because I accidentally shot something I'd intended to grab. This either destroyed it, or pushed it away - often into spikes.

Secondly, it's too easy to drop items on a controller. You're supposed to drop them with Down on the D-Pad, but they also often got dropped when I used the analog stick and dipped slightly below the horizontal line, i.e. when the analog stick sent a Down signal (maybe this was a bug?). I found a workaround by always keeping the stick in the upper half, but it was pretty irritating.

Thirdly, there's an "Annoyed?" level skip prompt. I very much appreciate the intent behind this feature, but the implementation had an unfortunate UI: upon death, it pops up without delay, and the button prompt defaults to "yes". I frequently died while pressing X to throw speers, at some point the Annoyed prompt popped up, and so I accidentally skipped to the next level. So the "Annoyed?" prompt became a self-fulfilling prophecy.

In terms of the design, I wasn't a fan of the power gems. I often had to reset levels because I accidentally broke such a gem at the wrong time, or because I shot a power speer a few pixels too low or too high. I wish the dev had found a design that allowed these gems to respawn (without trivialising the puzzles).

The timed speer obstacle was another cause of frustration. And finally, it was weird that you couldn't drop down, then move sideways into a niche 1 tile high. I don't mind that as a standalone design, but it runs counter to most platformers, and in this game there was no visual indication that anything would be different.

Finally, a design I was ambivalent about: A few of the levels in the later stages aren't tightly designed, i.e. you can collect the emblem (= 100% the level) without using all the gems and items. I didn't exactly mind, since I'd gotten somewhat exhausted by that point. But I expect this wasn't intentional.

Ultimately, I liked Speer, and without these few UI issues, I think I might have loved it. It's polished and enjoyable enough that I'm surprised it wasn't released on Steam.

But seriously, if the three minor UI issues I've pointed out above were fixed, I think this game could do decently on Steam. Certainly enough to recoup the 100$ Steam fee. If you can't justify spending that money, I'm willing to offer a bet.

this game is so charming!!

How On Earth do you beat 4 - 21, i want to finish the game so bad but im just stuck, its really annoying

On my way, hang in there! Just started world 4.

It's easy :) Throw the portal on the yellow pad (from a distance) use it to fire on the red switch and your good to go.

You don't need the green diamond. And you need the yellow only to get to the medal.

I recently got [Speer] and i LOVE this game. I was wondering if anyone has any idea on how I could go about TASing this game.

Hey, I've been working on speedrunning this game (wr as of now), and just uploaded a video with exactly what you're looking for. If you're still interested, I'd love to work with you to see how far we could push this game. Just comment on the video or email me at mark101264@gmail.com

FYI you can move a flaming ball when you throw a sponge into it, which can also result in trapping it in walls ;)

It would be nice to be able to reconfigure the movement keys as well as the action keys. Also the captions that come up for the sponge refer to the old keys before rebinding, which is a little confusing. 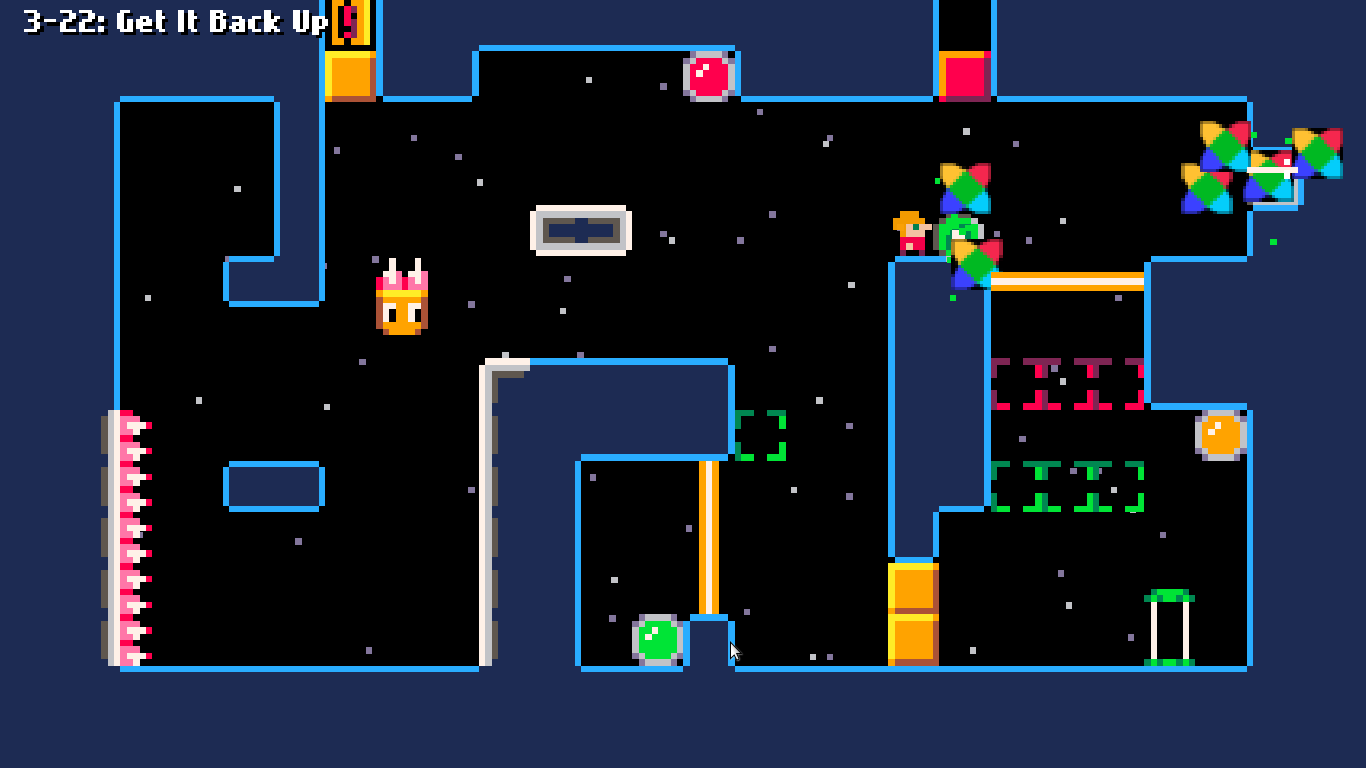 It'll be great to see it running on a megadrive ;D

oh thats pretty cool i hadn't heard of that before!

This is exactly what I needed in my life. A perfectly balanced out difficulty curve and an awesome soundtrack + visuals. I love it!

I liked your video , I made a puzzle platformer game "Lampy" , it would be nice from you to try it out :)

Epic platformer.  A must buy.

Really like the game so far! Noticed one bug though, if you restart the room from the pause menu the music stops playing until you exit to the main menu and choose the stage again. Runs great otherwise though!

Reply
and05 years ago

Just uploaded a fix, thanks!

Super fun game. Great to zone out and work through a few levels. Would love to see this on mobile someday in the future. Has both style and personality, take my money already.

I love the core mechanic! I'm really looking forward to some hard levels you come up with!

Great game (even with what you've got so far)!
Fun mechanics and just the right level of difficulty (for someone like me!)
All the best!  :D