Powerups are a staple of video gaming, and platformers had some of the best around. Sonic's elemental shields, Mario's mushroom, Kid Chameleon's transforming helmets...there's a lot of good stuff in there. It seemed obvious to put powerups into Go! Go! PogoGirl as well, but for a long time, I wasn't quite sure what to put in.

Powerups need to enhance and support the gameplay; you can't just throw in anything you want. Speed shoes make sense for Sonic, but for Mario they'd be more of a hindrance, as there's too many enemies around that can kill him with one or two hits. If a powerup makes the game too easy, it'll seriously mess with the overall balance; if it's not useful enough, you might as well not have it. And sometimes you even want to outright avoid certain powerups in games, because they're more of a hindrance. If you've played Contra or  Ghosts 'n Goblins, you know what I'm talking about. Get that laser away from me, I've got the Spread Gun!

There's many other factors as well, such as how to get powerups, how long they should last, whether you can stack them, etc. In short, there's a lot of stuff you have to think about when designing powerups for your game. And think I did. The result of that thinking were two powerups I'll present to you right now!

First up is the shield. Much like in Sonic, this powerup will protect you from a single hit. It also works on spikes, so if you misjudge a jump, you get a chance to bounce back out! For this to work you'll obviously need a few frames of invincibility after losing your shield, which I've implemented. This is one of those things that is very easy to forget about beforehand! 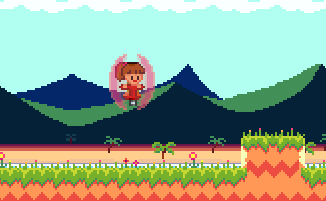 The second powerup is the invincibility. It's a classic powerup, so of course it kinda had to appear in Go! Go! PogoGirl as well! It's represented by a golden pogo stick and will give you a few seconds of invincibility. You can phase right through spikes, and hitting enemies will defeat them instantly. To underscore this power, I've added a flashing effect along with sparks that fly whenever you hit the ground.

You'll notice that both powerups serve to mitigate damage. This might seem boring, but it just made the most sense to me. The game is about bouncing and avoiding hazards, so I felt like the powerups should make this easier for the player. Offensive powerups (such as Mario's Fireflower) would make the gameplay needlessly complicated, and defeating enemies isn't really the point of the game anyway; in fact, bouncing off of enemies is often the quickest way forward. That's also why you can still bounce on enemies even if you have the invincibility powerup. Another thing that would have been easy to forget, and which would have made the powerup a bit of a liability!

Another idea I had was making the player bounce higher, but in testing, this didn't feel as good as you'd think it would. So in the end, I settled on two classic powerups that help with the game's core mechanic: Bouncing without hitting anything dangerous.

To me, that made the most sense. But what do you think? Did I miss any obvious ideas for powerups? Let me know!