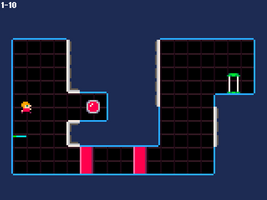 Welcome to the [Speer] Devlog-o-rama! Yeah alright, it probably won't be as entertaining as that name would imply but I should at least try I suppose.

So, a quick introduction to this project: After finishing and releasing my previous game Magnet Man Adventures (check it, play it, love it, share it) I went through my pile of game ideas to figure out what my next project should be. I knew I wanted to make another platformer and I knew I wanted it to center around a simple core mechanic. And...well, that's how I came up with [Speer].

So what do you do in this game? It's a quick and hard platformer with single-screen stages where you have to use your Speer (like a spear but with a cool, intentional misspelling) to make your way to the goal. The main use of the Speer is to act as a platform after you've thrown it into a wall, which is an idea that is completely original, do not steal. Of course it doesn't stay as simple as that for long: Your Speer won't stick to certain surfaces, enemies can knock it down, barriers will block your way... I'm still coming up with new ideas, but everything will center around mastering the Speer.

The game is still in a pre-Alpha stage, but I aim to have a playable version ready within the next 2 weeks or so. The main hub for news regarding the game will be right here, so make sure to follow the game if you're interested at all. I'll also try to post the occasional tidbit on Twitter, so follow me there as well if you are so inclined.

And that's it for this quick introductory post. I'll try to get some stuff done over the weekend, so you can expect the next devlog sometime next week probably.

Use your Speer as a platform!